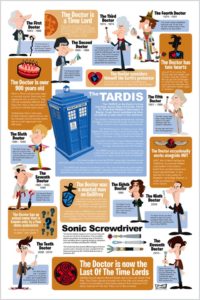 It has been a week for cool Doctor Who illustrations! The latest incarnation of the show has certainly boosted the popularity of the series and I suppose that has inspired new fans to be creativity as well as driven those of us who have been die hard fans since the sets were made of card board to flaunt our useless trivia..

Bob Canada has created this marvelous infographic to bring the noobs up to speed on the backstory of one of televisions most convoluted characters.